The Brontës, Elizabeth Gaskell and the legacy of Romanticism 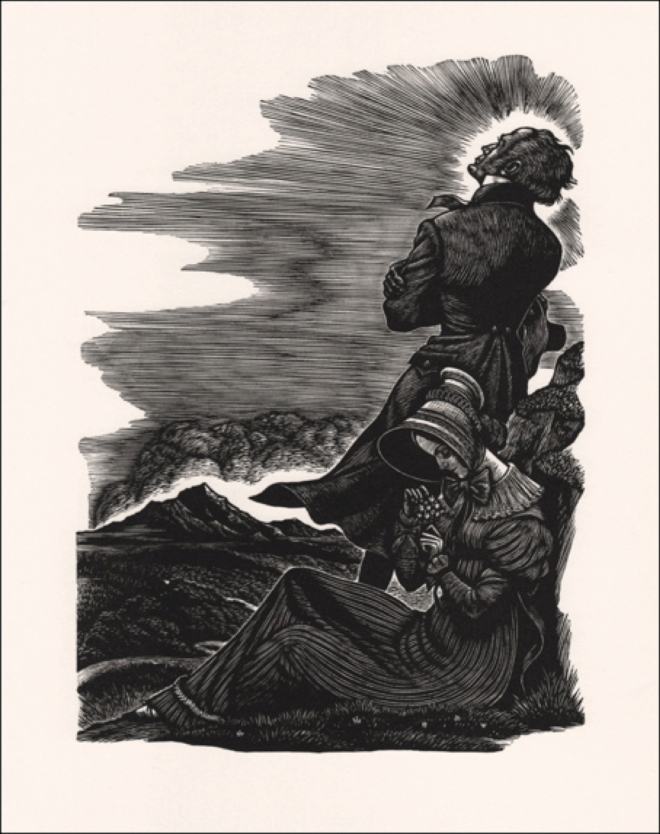 The above quotation, taken from Branwell Brontë’s published article in the Halifax Guardian on the Northumbrian artist Thomas Bewick, demonstrates the extent to which Branwell, and indeed all the Brontë family, had internalised the tropes of Romanticism, finding something worthy of poetic reflection even in the humble flower that would hitherto have been trodden underfoot. In fact, the very first chapter of Jane Eyre finds the eponymous heroine reading Bewick’s A History of British Birds (1794-1804). Despite her tyrannous upbringing, the young Jane declares, ’With Bewick on my knee, I was then happy.’ The book with its celebration of the natural world takes Jane out of the wretched Gateshead Hall and allows the flight of that thing celebrated above all else by the Romantics: her imagination. Agnes Grey also promotes a post-Romantic view of nature, with Agnes’ plea to ‘Remember, the birds can feel as well as you’. Charlotte Brontë urges her friend Ellen Nussey not to ‘be startled’ by her recommendation to read Byron, or at least the tamer parts. Meanwhile, Wuthering Heights, Villette, and The Tenant of Wildfell Hall, all engage with the darker side of Romanticism through their gothic themes, whilst the trope of the Byronic hero haunts many of the Brontë novels, and a significant portion of their Juvenilia.

Elizabeth Gaskell too was hugely influenced by the Romantic poets and artists, writing of Wordsworth ‘my heart feels so full of him I only don’t know how to express my fullness without being too diffuse’, and expressing a similar sentiment to Branwell’s article, with Gaskell lamenting how ’the beauty and poetry of many of the common things and daily events in life in its humblest aspect does not seem to me sufficiently appreciated’. Irene Wiltshire has been more specific, arguing that Wordsworth’s greatest impact on Gaskell’s writing was ‘his belief in the importance and universality of feeling…and, in particular, Wordsworth’s alignment of nature with feeling and moral growth’. Certainly, one can see such emphasis on feeling within Wives and Daughters, Ruth, Sylvia’s Lovers and her shorter fiction such as ‘Lizzie Leigh’. However, it is not just the universality and intensity of feeling that Gaskell borrows from Wordsworth, but the focus on previously disenfranchised individuals too, most notably in Mary Barton and North and South. Moreover, as with the Brontës’ work, one can also find traces of the Byronic hero, the gothic, and the celebration of the natural world throughout Gaskell’s novels and short stories.

In this the bicentenary year of Emily Brontë, arguably the most overtly Romantic out of Gaskell or the Brontë siblings, this one-day conference in association with the Brontë Society, seeks to re-evaluate some of the ways in which these writers responded to, reacted against, or elucidated their Romantic inheritance. It also seeks to compare and contrast how the Brontës and Gaskell responded to Romanticism in their unique ways, foregrounding how their differences in politics, religion and attitudes towards the moral role of literature more generally, influenced their reactions towards and development of Romanticism.

We welcome 250 word abstracts for 20-minute papers from all Brontë and/or Gaskell researchers and enthusiasts. Topics may include, but are certainly not limited to:

All proposals should be emailed to Edwin John Moorhouse Marr via edwin.marr@pgr.anglia.ac.uk no later than 20th April 2018. Please feel free to email with any questions, and we look forward to reading your abstracts.